Class Dojo is a behavior management system that tracks behavior, motivates students, and instantly connects with parents.  It’s very simple, but very effective.  I feel compelled to share my experience with Class Dojo with all teachers now, as it has changed my life as a teacher in the few weeks since I came across it while perusing the iTunes app store.

END_OF_DOCUMENT_TOKEN_TO_BE_REPLACED

BEFORE: Rhythm composition with solfege pitches

AFTER: Rhythms and solfege pitches translated into standard music notation

My second grade students have completed the third step in their composition process–translating their rhythms and pitches into standard music notation. They began by writing 16 beat rhythm compositions, using quarter notes, pairs of eighth notes, and quarter rests. Then they added solfege pitches of a pentatoic scale (do, re, mi, so, la) to their rhythms. Now, they’ve used their solfege pitches to place their rhythms on a staff.

END_OF_DOCUMENT_TOKEN_TO_BE_REPLACED

I love introducing my students to music from different parts of the world. As kids, they don’t have the years and years of experience in one musical tradition to make music from other traditions sound “weird” or “unnatural” as is sometimes the first reaction that adults feel. Last year, our spring concert theme was “Music Around the World,” and each grade focused on a different continent, singing at least one song in a foreign language. I think it was easier for them to learn the songs than it was for me!

This year, I’ll have a different theme for the spring concert, but I still want to expose my students to different musical cultures, especially when our school does have several students who are not from the mainstream culture of that area. So we’re going on musical “field trips”! Over the last couple of weeks, first graders went to New Zealand!

END_OF_DOCUMENT_TOKEN_TO_BE_REPLACED

My second graders have continued their work on their four measure compositions. Since composing the rhythm of their pieces (see Second Grade Compositions: Step 1 for more details on that), they have been learning about pitch by studying the solfege scale. They’ve become quite proficient in labeling the solfege syllables of a song written in standard music notation, and then being able to sing the tune accurately without hearing it first. I was considerably older than second grade before I could do that! This new knowledge was applied to their compositions last week.

END_OF_DOCUMENT_TOKEN_TO_BE_REPLACED

The Okee Dokee Brothers, Justing Lansing and Joe Mailander, with their well-deserved Grammy.

It seems that all Minnesotans are celebrating the Grammy win of the local kids’ bluegrass duo, the Okee Dokee Brothers, but none more than my students.  Ever since the Okee Dokee Brothers visited my school last spring and performed a concert, my students have been obsessed with their music.  They beg to listen to “Bluegrass for Breakfast” every day.  They regularly ask me when the band is coming back to the school.  Any time they hear a banjo, someone will comment that it’s the instrument that Justin plays.  So in honor of their victory, we held our own version of the Grammys in my classes. END_OF_DOCUMENT_TOKEN_TO_BE_REPLACED

“We both taught each other. And that’s how it should be.”

During a kindergarten lesson on the common melody of “Twinkle, Twinkle Little Star” and “The Alphabet Song,” one girl offered to teach her class the actions for “Twinkle, Twinkle” when she discovered, much to her shock, that I did not know them.  She stood in front of the class and everyone followed her lead as we sang.

As she was lining up to leave music class, she pointed out to me that if it weren’t for her being in my class, I wouldn’t know the actions to that song.  In fact, she had taught me–her teacher–something!  I felt like I was observing someone having an epiphany (not an uncommon observance in a kindergarten classroom), as she pondered this, and then stated very decisively, “We both taught each other.  And that’s how it should be.” END_OF_DOCUMENT_TOKEN_TO_BE_REPLACED

I was recently interviewed on the podcast Composer Quest about teaching composition to my students, my perspective on composition as a performer, and my ethnomusicology research.  You can listen to it at the link below.

Please check out Charlie’s other great Composer Quest episodes, and leave him a review on iTunes!

I got an email from my cousin today, who has a son in fifth grade who is trying to decide which instrument to play in school.  His favorite, and one that he received a high score on when he tried out all of the instruments that he was interested in at school, is the violin.  Unfortunately, he has to choose between orchestra and band.  Because his friends are going for band instruments, he is considering saxophone instead.

As school music budgets are being cut, instrumental programs are starting later, which makes the instrument decision come at a difficult time in a child’s life.  My cousin’s son is a very sensible and cool kid, and it’s sad to think that he is even considering giving up the opportunity to play an instrument that he really likes and feels drawn to out of fear of being made fun of or not fitting in with his friends.

END_OF_DOCUMENT_TOKEN_TO_BE_REPLACED 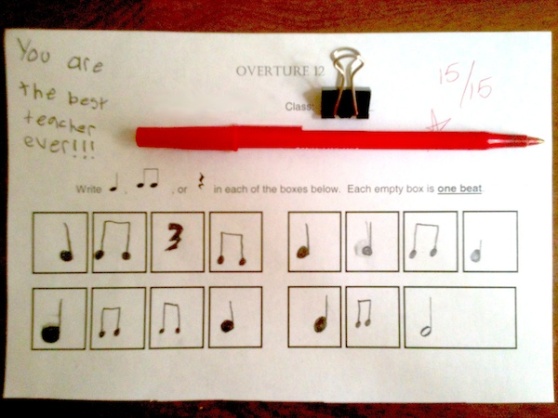 If only all of the papers I have to correct provided such an ego boost!

My second graders are composers! They’ve just completed the first step in a process that will result in each student having created an original piece of music, written in standard music notation. So far, they’ve exceeded my expectations (as they often do), and they seem to really enjoy the work.

END_OF_DOCUMENT_TOKEN_TO_BE_REPLACED

I officially committed to being a teacher this weekend as I began my first trimester of a licensure program at Augsburg College.  Never one to do things in a timely manner, I was accepted only three days before the registration deadline and the nice people in the education department helped me to do everything that needed to be done to enroll while I was a hundred miles from campus. END_OF_DOCUMENT_TOKEN_TO_BE_REPLACED